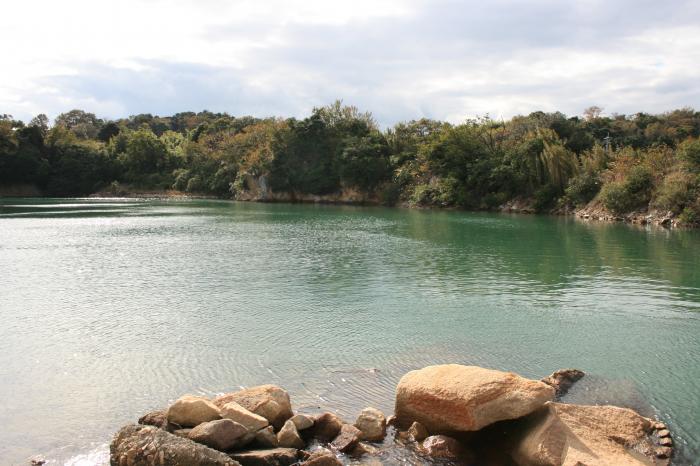 Inujima in Okayama prefecture is renowned for its striking contemporary art projects, including the Inujima Seirensho Art Museum and the Art House Project, both of which transformed abandoned buildings into intriguing art experiences.
While strolling around the island to enjoy these sites, I was struck by the number of ponds. As I walked towards the port from Olafu Eliasson’s work Self-loop in I-Art House, I stumbled upon what I am sure must be the biggest pond on the island. I was surprised to learn that it had once been a little mountain.

I asked Keiko Arimoto, who was born and raised on Inujima, to explain. Keiko traveled all over Japan to locate stones from Inujima and compiled her findings into a book. Because of that, she’s known as ishi obachan or Auntie Stone. “This whole island was once full of quarries,” she told me. “Inujima stones traveled all over Japan and were used to build things like the walls of Osaka Castle and the shrine gates of Tsurugaoka Hachimangu in Kamakura. The many ponds on the island are the remains of these quarries.” 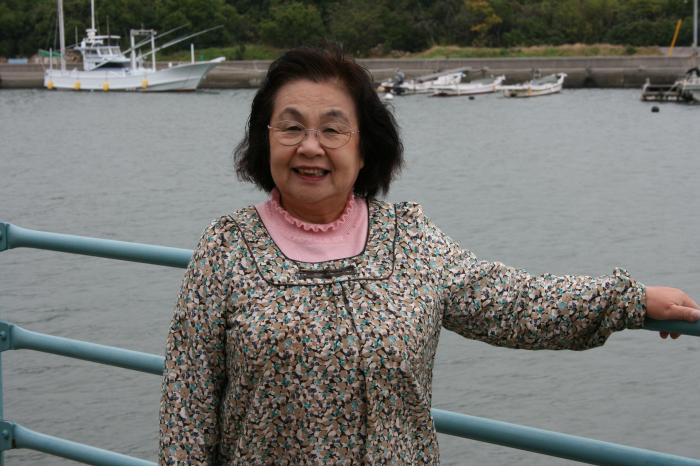 I asked her to tell me about the huge pond by I-Art House. “That used to be Gyonyama. Until the late 19th century, it was a little mountain, but the islanders dug it up to extract the stone. They dug deep into the earth, leaving a great big hole that filled with water, forming that pond. It’s connected with the sea. People used to fish here, and when my children were little, they used to dive in it to watch the sea creatures. At one time, it was used to farm puffer fish, about fifty years ago, I think.”

It was hard to tell just by looking that the pond had once been a mountain.
“On top of Gyonyama, there used to be a shrine to a god called Gyonsama,” Keiko continued. “The islanders often went there to pray. There was also a little field surrounded by pine trees, where people went to cool off in summer. When the quarry started up in 1897, the god Gyonsama was moved from the top of the mountain. It’s now enshrined in Inujima Tenmangu, which is dedicated to the island’s guardian deity.” 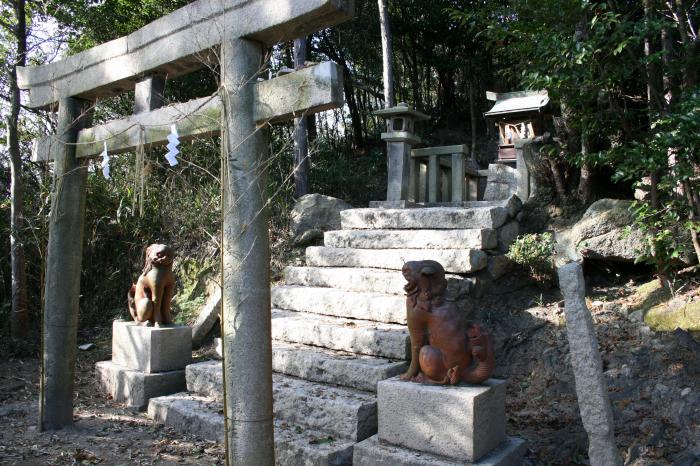 Tenmangu is located about ten minutes from the port on foot. The road there is lined with stone walls, and the shrine is just up and over a slope. If you climb the long staircase to the top, you’ll come to the main building. Gyonsama is enshrined on the far west of the precincts along with the water and mountain gods. The shrine’s guardian dogs are made of ceramic, and the muzzle of the one on the right has broken off. “It was like that even when I was a child,” Keiko told me. “We used to fool around and put our hand in its mouth.” 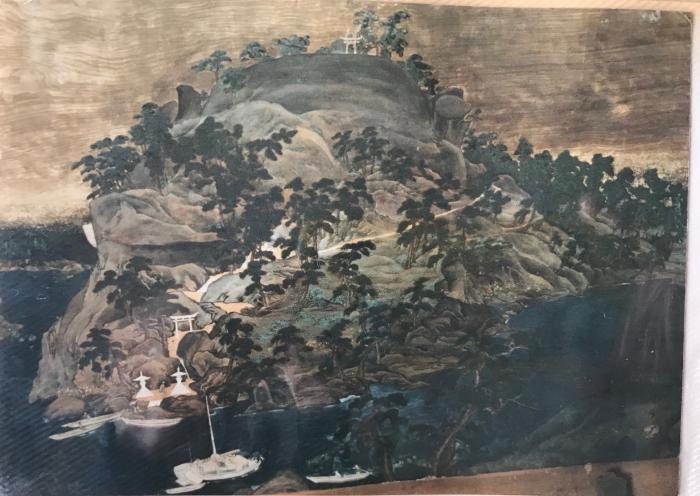 Not only was the god Gyonsama moved off the mountain, but Inujima Tenmangu, the shrine to which it was moved, was also brought from somewhere else. According to Keiko, it was originally located on Inunoshima, an island right next door. That island was turned into a quarry to supply stones to build the piers of Osaka Port in 1899, and Tenmangu was dismantled and taken to Inujima, where it was rebuilt. You can see images of the shrine on Inunoshima, and of the island before it was quarried, in votive pictures enshrined inside Inujima Tenmangu. 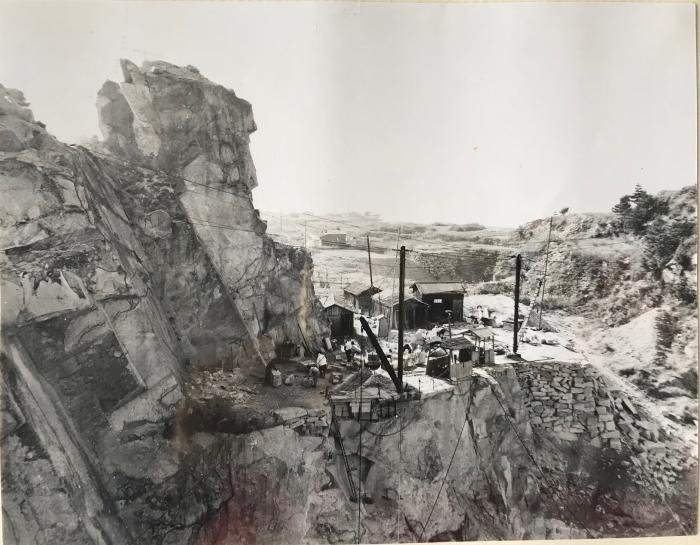 Stone quarrying on Inujima was at its height during the Meiji period (1868-1912) and particularly during construction of Osaka Port. Many stone masons and sailors came here, and the islanders still refer to that period as Chikkosengen, meaning “harbor-building/thousand houses.”

“Like Gyonyama, there are no mountains on Inujima anymore, because the island sacrificed all its stone to the quarry industry,” Keiko said. “I wondered where all those stones went and began investigating. That’s when people began calling me ‘Auntie Stone.’” She showed me old photos with scenes that no longer exist on the island. The one above is of a quarry in the mid-1960s. 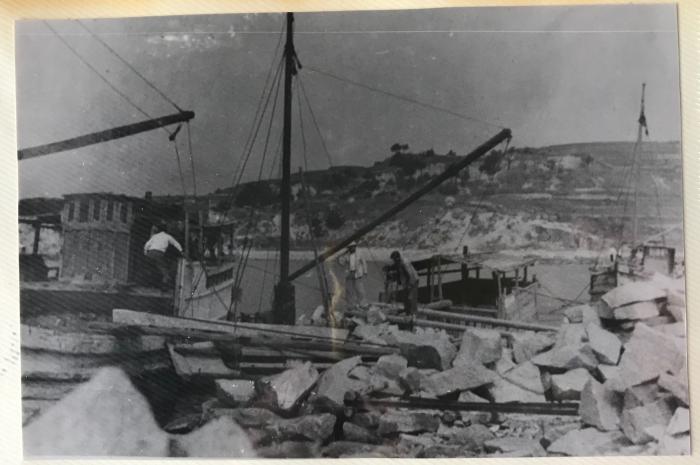 This photo here is from around 1955. Many boats came to carry the quarried stone away from the island. 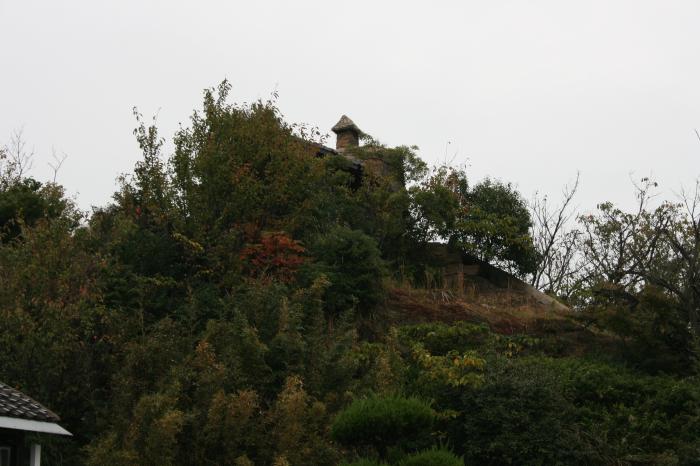 Just a short 3-minute walk from the port, there is a steep hill with a little shrine on top. This is Yamajinja, meaning ‘mountain shrine.’ Quarrying is very dangerous work, and the gods of the mountains have been worshipped since ancient times as guardian deities. The ninth day of January, May and September were special holy days and the only days when the stone masons got a day off work. They would gather at the boss’s home for a feast of nishime (vegetables simmered in soy sauce) and gomoku gohan (rice cooked with fish and vegetables). A ceremonial sumo wrestling tournament was also held in the shrine grounds on these days. 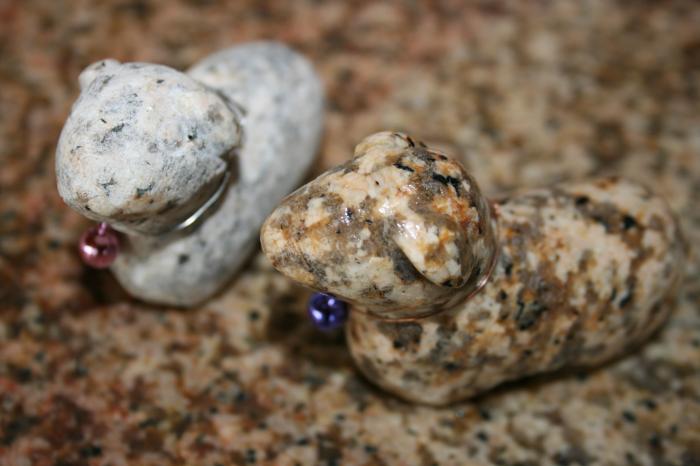 “Did you know that Inujima stone changes color when it gets wet?” Keiko asked me. She poured some water over a dog-shaped stone ornament to show me. The white stone instantly turned a golden brown. Many houses on this island have beautiful stone walls around their yards. It would be fun to explore Inujima on a rainy day to see what color they become. 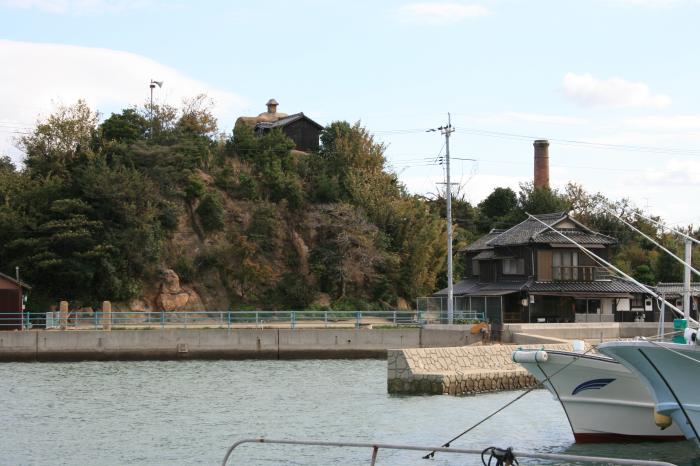 From Osaka Castle to the imperial palace in Tokyo and Tsurugaoka Hachimangu in Kamakura, the stones of Inujima have traveled to many parts of Japan. “It’s a bit like they were married off to distant places,” Keiko said. “I hope people who come here will see Inujima not only as an island of art, but also as one of stone. If they climb the steps to Yamajinja, they can see the island village and the Seto Inland Sea. From there, they can explore the village lanes that are lined with stone walls and walk to Tenmangu.”

They are many other reminders of days gone by on Inujima, such as stones engraved with family crests identifying which clan quarried the stone, or the large, round boulders known as Dango Iwa scattered in the sea near the port. When you come, be sure to take time to discover these remnants of the island’s past.