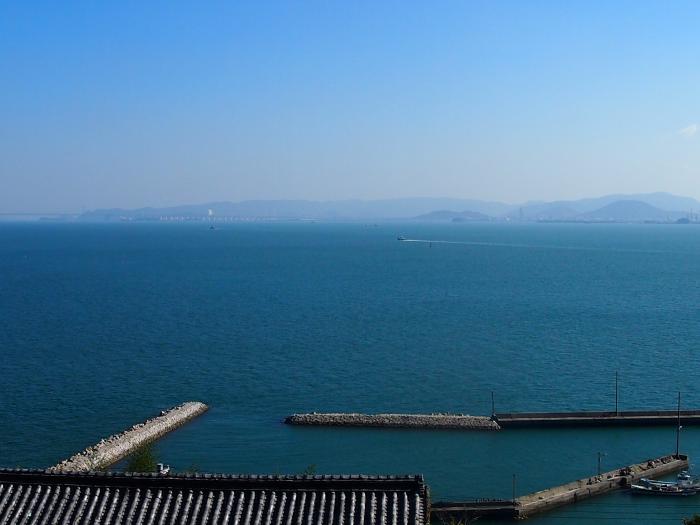 From Tadotsu Port, it takes about 25 minutes to Takamijima Island by ferry. When I arrived on the island, I came across a group of mountain climbers.

On Takamijima Island, you will find Mt. Ryuo, which has an altitude of 297 meters. Supposedly when locals from Tadotsu Town on the opposite shore looked out at the islands in this area, Mt. Ryuo appeared to be the tallest, and so it was named “high view island”, Takamijima.

My guides for the day were Ichiro Nishiyama, who had lived on Takamijima until he finished elementary school, and Masamichi Yamano, who was born on the island and returns to visit every Saturday.

First, we turned right from the port and headed toward Ura Village, walking along a narrow path up the mountain that had been used as a main road in the past. Takamijima Island is mostly mountainous, but the steep slopes of Mt. Ryuo have been utilized well. It is impressive to see how the residents of Takamijima have built roads and houses up the side of the mountain, using stone retaining walls for support. 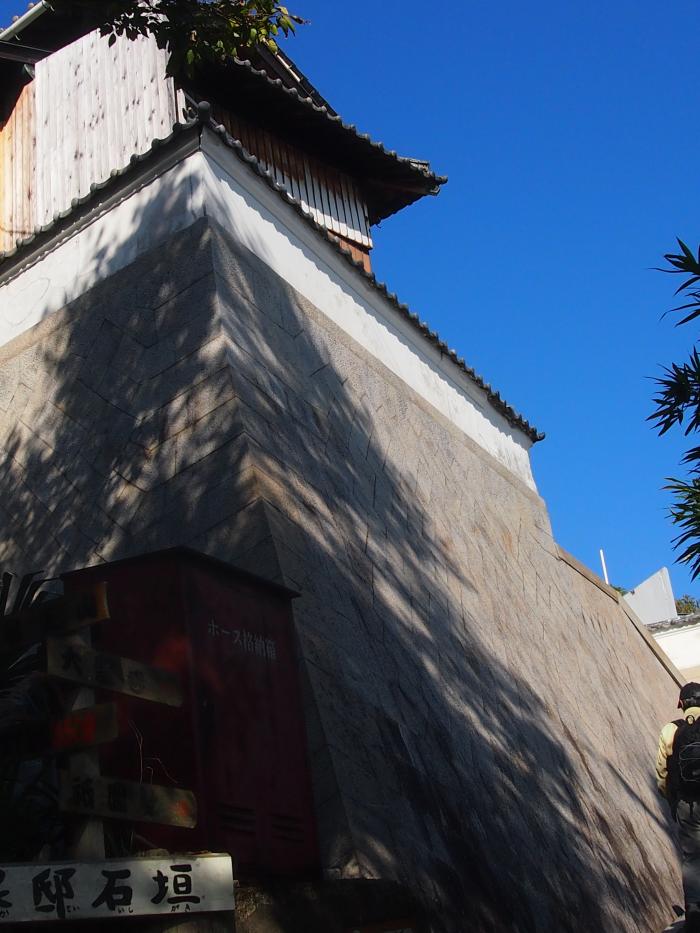 The house built on a stone wall that resembles a Japanese castle was once the home of the Nakatsuka Family, who had been successful overseas in the United States. During the Setouchi Triennale 2013 and 2016, this property was transformed into a restaurant called “Terrace of Inland Sea”. The stone wall supporting the Nakatsuka home was built in 1932. I admired its smooth surface and roof tiles featuring exquisite carp designs. 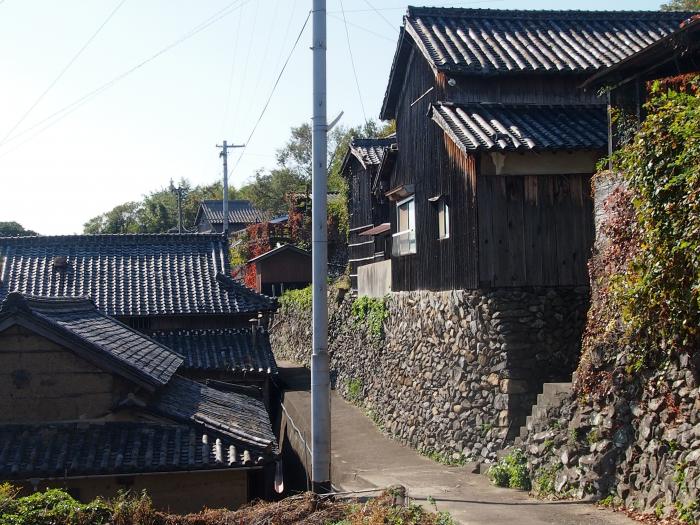 “You should take a picture here. It will look great on Instagram,” suggested Mr. Yamano, after we passed the only 4-way intersection on the island.

Looking around, I could see rows of beautiful houses built atop stone retaining walls. Despite the number of houses there are, the current population of Takamijima Island is only 30. Most of these homes are empty, and if you look closely, you will see that almost all have ivy growing up their walls. When Takamijima Island was used as a location for the Setouchi Triennale 2013 and 2016, many artists utilized these vacant homes in their works. The piece “Transition House” (Kayako Nakashima), located in Ura Village, is an example of one of these works, and features a beautiful display of light streaming into an empty home.

“This stone wall was built 300 years ago,” Mr. Nishiyama explained as he showed me his old home, which had been used as a rest space during the Setouchi Triennale. The home is aired out once a month, perfectly preserving the doma (a room with an earthen floor) and the zashiki (a traditional Japanese-style room with tatami mats). 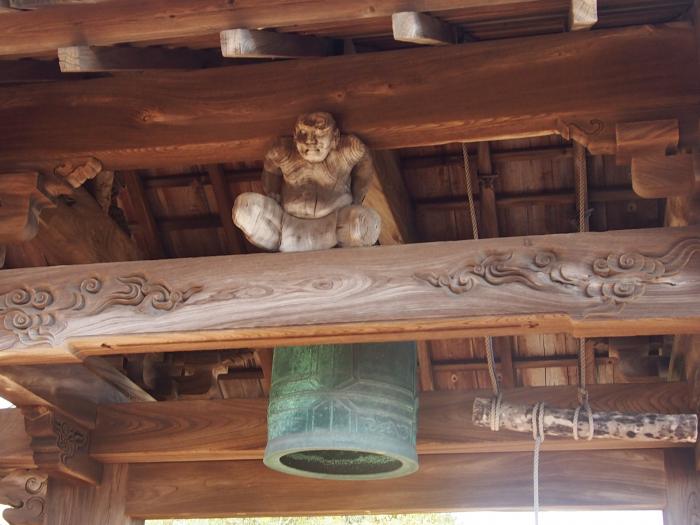 Climbing up a mountain path, we arrived at Daishoji Temple. A charming statue of a Buddhist guardian deity is enshrined on the main temple gate. Looking out across the sea from this temple, I had an amazing view of everything from the Seto Ohashi Bridge to Marugame Castle, as well as Mt. Zozu, home to Kotohiragu Shrine! On a clear day, apparently you can see all the way to Okayama Prefecture on the other side of the Seto Inland Sea from here.

Walking further up the mountain from Daishoji Temple, we arrived at Mr. Yamano’s childhood home. Inside, there is a huge photograph of pyrethrum flowers displayed on one of the walls. This house was also used as an exhibition space during the Setouchi Triennale 2013 and 2016 for the artwork “House of Pyrethrum” (Haruyuki Uchida, Ayako Ogawa and Katsura Tanabe).

“I grow pyrethrum flowers as a hobby, so for the past 8 years I’ve been coming to Takamijima Island once a week to take care of my plants,” said Mr. Yamano. “When the artists came to tour the island, they saw my field of flowers and decided to create a pyrethrum art piece inside my house.” Mr. Yamano has been involved in the production of many different art pieces on the island, not only lending his home as an exhibition space, but also helping to clear out and repair the building used for the piece “Transition House”.

And now, for the main attraction of our Takamijima Island tour.
Mr. Nishiyama and Mr. Yamano are members of the “Sazae-tai”, a group of volunteers who came together in support of Takamijima Island. The 50 members of this organization work as volunteer guides and entertain guests at rest spaces during the Setouchi Triennale. At other times of the year, they gather regularly to care for flower gardens and repair mountain roads. 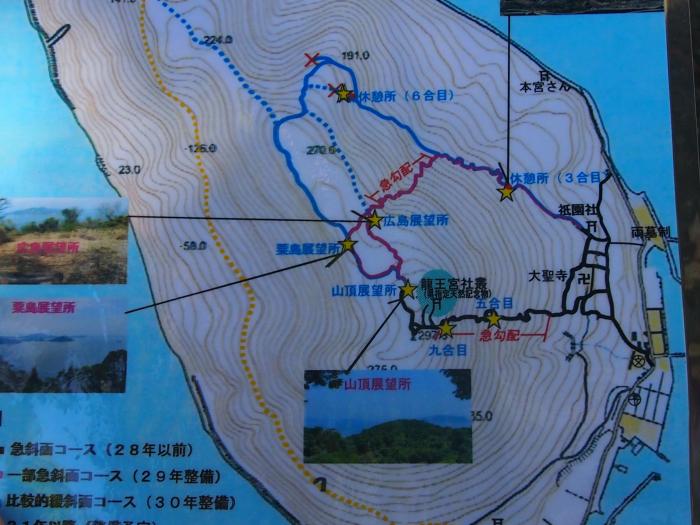 Mr. Yamano, a member of the Sazae-tai’s mountain road repair team, led the way as we climbed up Mt. Ryuo. Usually, climbers tackle Mt. Ryuo using a path that goes straight up the steep slope of the mountain. However, the path prepared by Mr. Yamano and members of the Sazae-tai for visitors during the Setouchi Triennale is an old route that winds its way up the mountain through fields. This path is shown in light blue on the map above.

“This path hadn’t been used for about 50 years since we stopped growing pyrethrum flowers on the island,” said Mr. Yamano. “We had to rely on our past memories to find the path, then we cut down trees and shrub to make it walkable again.”

Although this old path takes a roundabout route to the top of the mountain, it gives you the chance to enjoy the view from a variety of angles as you walk up a gentle slope. 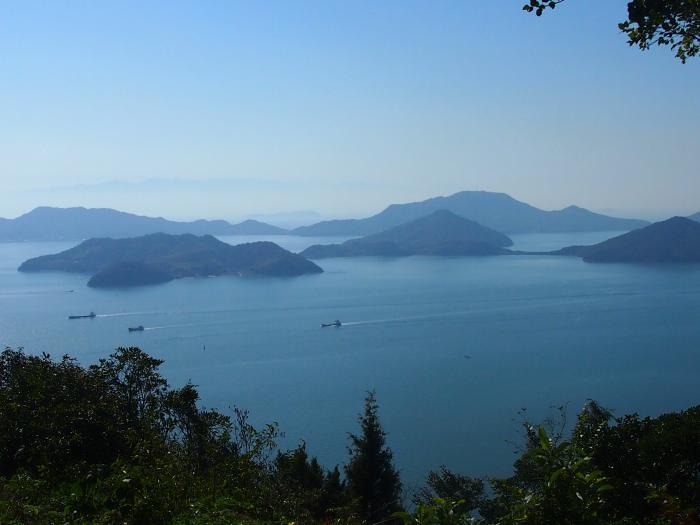 From a rest spot located around the middle of the mountain, I could see the islands of Ushijima, Honjima and Hiroshima. As we walked further up, the islands of Teshima and Oteshima came into view, lined up like a mother turtle and her baby. Of course, it was the members of the Sazae-tai who placed the bench in this rest spot. Whenever I felt I little tired, I was grateful for a place to rest. 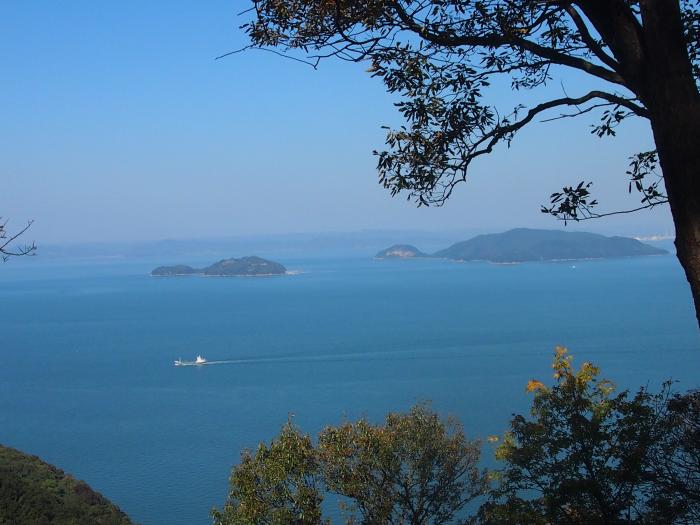 “I really recommend this view,” commented Mr. Yamano, as we approached an observation deck. Both Awashima Island and Mt. Shiude were visible from here, and in the distance, I could even catch a glimpse of Ibuki Island. Besides the steam whistles of the boats, there were hardly any other noises to be heard. It was so relaxing to just gaze out at the beautiful view before me, and feel time slow to a leisurely pace. 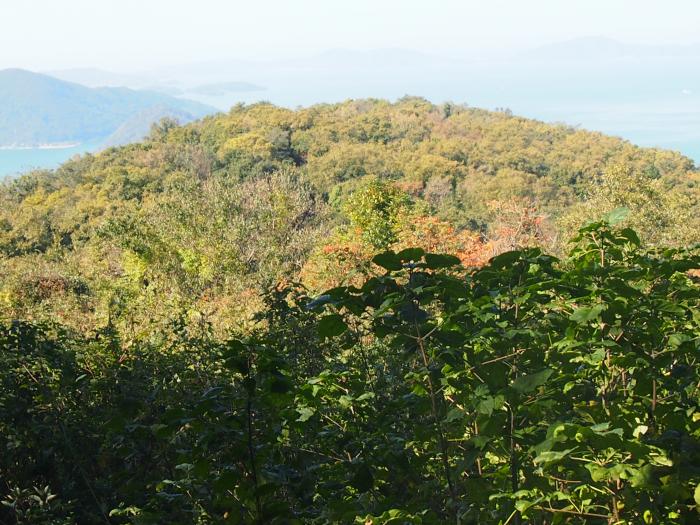 About an hour after we had started our climb, we reached the top of the mountain, where we could see Sanagijima Island.
“When I first came to this spot, the trees were so thick, you couldn’t see anything,” Mr. Yamano explained. “After we cut down trees and trimmed back the shrub, we were finally able to see this amazing view. Actually, this is the very same place where the pyrethrum field was in the photo hanging up in my house.”

Just like the photo, the top of this mountain used to be covered in a field of pyrethrum flowers. Now, the mountain is covered so thickly with trees, that it is hard to imagine it used to be a flower field 50 years ago.

After taking a look at a Shinto shrine that used to perform rainmaking rituals, we headed back down the steep slope to the bottom of the mountain. You can use a map available on the island to find your way along the mountain path maintained by the members of Sazae-tai. Apparently, the number of visitors to Takamijima Island is increasing, including mountain climbers who are interested in Mt. Ryuo because it was chosen as one of Japan’s 100 famous island mountains, as well as tourists from outside of Kagawa Prefecture. If you come to the island for mountain climbing, I recommend that you walk in a group rather than alone; wild boar have been living on the island for the last 4 years or so. 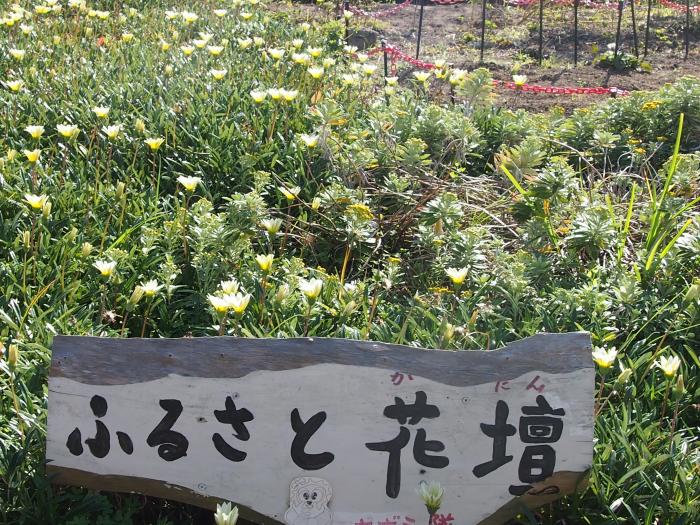 At around three o’clock in the afternoon, the sun began to set on Takamijima Island. We headed back to the port, admiring all the flower gardens cared for by Sazae-tai members along the way. Looking at these large gardens, planted with all kinds of seasonal flowers, I could feel how deeply members of Sazae-tai love this island.

Takamijima Island will be featured as a location for the Setouchi Triennale 2019 during the autumn session. Strolling around this island, with its abundance of beautiful scenery, offers the perfect opportunity to soothe your soul as you admire the artworks on display.