2018.07.27 Sending off the Insects with “Mushi Okuri,” Shodoshima’s Summer Ceremony 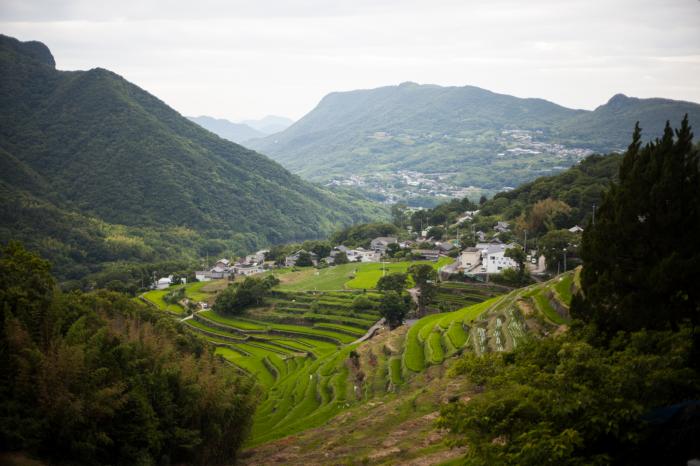 Shodoshima Island is the second-largest island in the Seto Inland Sea, after Awajishima Island. While people may associate Shodoshima with the sea, it is also home to beautiful mountainous landscapes, including Kankakei Gorge, known as one of the Three Most Beautiful Gorges in Japan. From Mt. Hoshigajo, the highest peak in the Seto Inland Sea, one can see the faraway Akashi Kaikyo Bridge. There are many stone quarries on the north side of Shodoshima, where most of the stones used to build the Osaka Castle were mined.

I visited the Hitoyama and Nakayama regions, which are surrounded by mountains. The area is blessed with rich water resources, and the beautifully simple landscape of rice fields extends in every direction. Because the sea is not visible, I almost forgot that I was on Shodoshima Island.

Both Hitoyama and Nakayama have their own Farmer’s Kabuki Stage, where the backstage staff and actors onstage are all locals.

Historically, Shodoshima had many travelers passing through to and from the Kansai region. It is said that in the peak years during the Meiji Period, kabuki plays were performed in over one hundred locations on the island. Since those days, the number of theaters has steadily decreased, and now only two theaters remain.

There will be a detailed Exploring Setouchi blog post about Farmer’s Kabuki in the future, so please look forward to it.

In Hitoyama and Nakayama, there is a unique local tradition that has been passed on through the generations to today. It is called “Mushi Okuri,” or “seeing off the insects,” and it has become a traditional symbol of the beginning of summer. At sunset, children hold torches and walk through the pathways in the rice fields, praying that pests will not harm the crops.

Based off of insects’ instinctual attraction to light, Mushi Okuri began in the early 16th century, then spread across agricultural regions throughout Japan in the Edo Period.

It is said that in the old days on Shodoshima, the flame was passed by relay along the Denpo River, which ran through each of the local communities (Nakayama, Hitoyama, Kuroiwa, and Kamisho), following the river downstream, to lead the insects all the way out to sea. 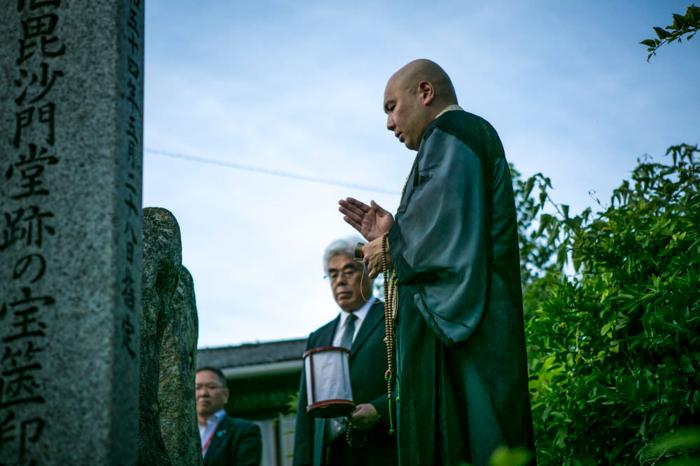 I spoke with Mr. Fujimoto, the head monk of Tamonji Temple, leading the Mushi Okuri ceremony in Hitoyama.

“Mushi Okuri is a tradition that has continuously been performed for over 350 years, since the Edo Period. The initial flame is lit with sunlight concentrated through a magnifying glass. Then it is carried from here to the Hachimangu Shrine in the Hitoyama Farmer’s Kabuki Theater, and is used to light the torches of the participants.”

Those torches are handmade in each household, using old rags and scraps tied to the end of a bamboo stick, and are carried by children. Recently, the number of adult participants has been increasing, but the task of carrying the torches is supposed to be left to the children. The head monk smiled when I asked him to recall his childhood memories.

“It was a lot of fun. In the old days, it was rare for children to go out and play at night. I remember carrying the torch that my father made by hand with old candle wax and other scraps, and competing with my friends to see whose fire could last the longest.” 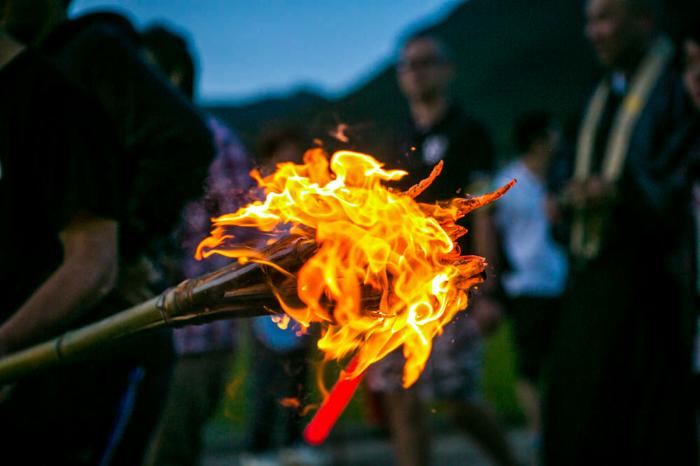 This area’s traditions, including the Farmer’s Kabuki performances, are known for placing children in the lead. In today’s society, opportunities for intergenerational exchange are decreasing. But in Hitoyama, the children participate alongside adults, creating a sense of community solidarity.

“It’s about taking care of people and everything around us. We enjoyed participating when we were young, so we naturally want to do it for our children as well. We take pride in our tradition, so we want to continue to pass it on as long as possible,” said the head monk.

Twilight fell. The flame brought from the main temple was carried to the Farmer’s Kabuki Theater, and the children lit their torches with it one by one. 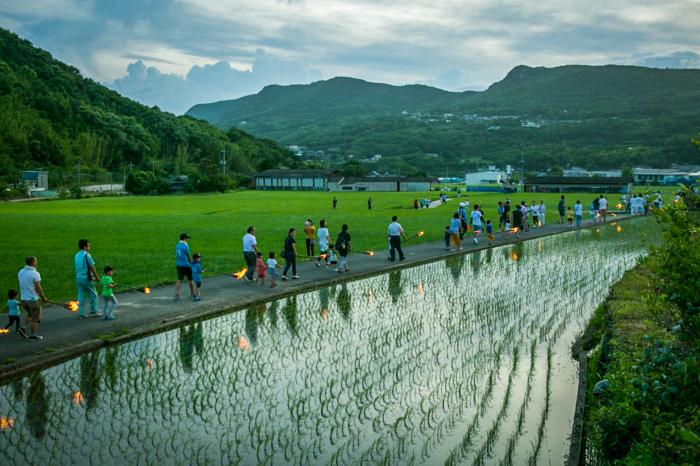 About one hundred children participated, the flames of their torches reflected in the pooled water in the freshly-planted rice fields. Like in the past, their torches are still individually handmade. 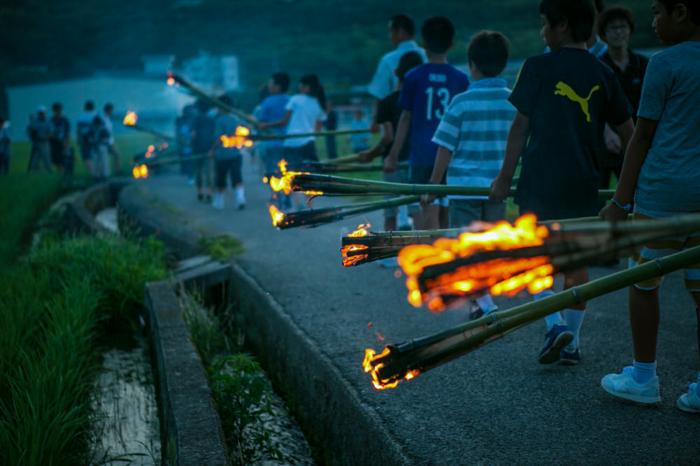 The tradition of Mushi Okuri in Hitoyama has been preserved for over 350 years. Watching it, I felt like I was seeing an ancient Japanese scene before me, one I hope will be passed on forever. 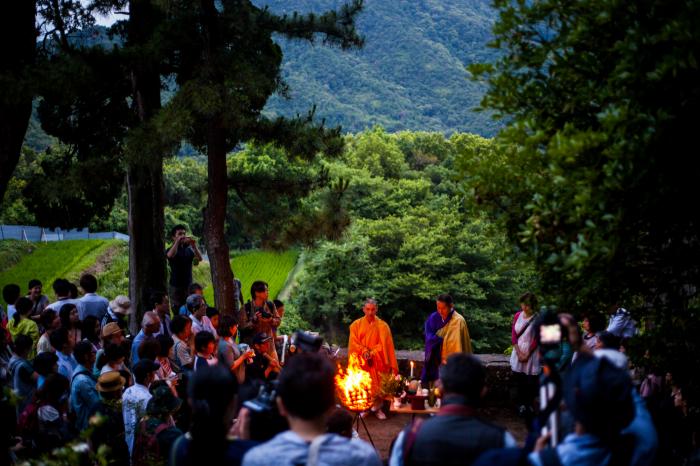 The other Mushi Okuri ceremony, in the Nakayama region, is held on the first Saturday of July. For a while, it was temporarily stopped due to the aging population, but it was revived starting from 2011 after Mushi Okuri was featured in a popular movie.

Nakayama is famous for its beautiful terraced rice fields. After a ceremonial prayer at the peak of Mt. Yabune, overlooking the some 800 terraced rice fields, the flame is transferred from gomagi (wooden Buddhist prayer sticks for ceremonial burning) to the torches. Two processions start, one from Kojinja Shrine, and one from Mt. Yabune. While walking down the steep slope, participants call out “Tomose, tomose,” (“Burn, burn”) as the two lines of people holding torches slowly convene together. 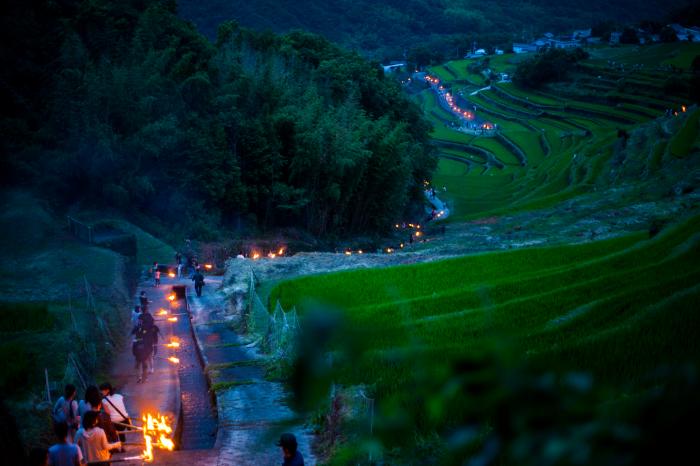 The call of “Tomose, tomose” echoes through the rice fields as dusk falls. The final destination is the Kasugajinja Shrine, where the Farmer’s Kabuki Theater is. 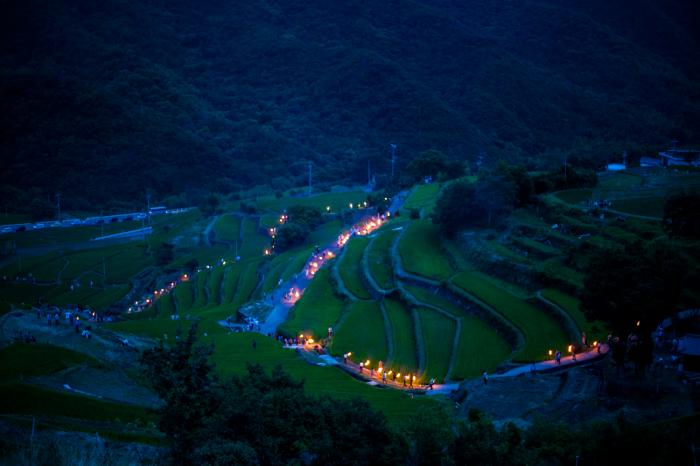 For people in earlier times, the year’s rice and agricultural harvest determined their fate and way of life for the following year. Mushi Okuri was passed down through the ages in these two regions as a prayer for a bountiful rice harvest. It is a beautiful ceremony that shows just how vital the rice harvest was. 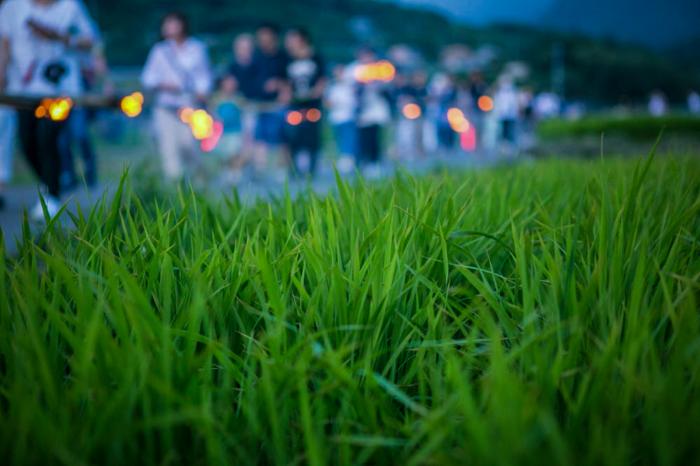 With the end of Mushi Okuri comes the hot summertime on Shodoshima Island. After the Mushi Okuri next year, the summer session of the Setouchi Triennale 2019 (July 19 to August 25, 2019) will begin.

The highlight of this Triennale is learning about the local communities though artwork. For all of the artworks in the Setouchi Triennale, their location is deeply meaningful.

Understanding the lifestyles, cultures, and traditions deeply rooted in the local communities allows one to see the artworks in a new light.